With T being the grand old age of two we did not yet think we would need to even *think* about potty training, let alone buying a potty and then a training seat because he preferred to stick the potty on his head.

We’d heard stories of boys being particularly lazy when it comes to toilet training so we didn’t want to rush into things. Plus, we’re very much a baby-led / toddler-led family – why would you want to create more stress than necessary?

So when T reached the apparent potty training “age” we decided to ignore it and carry on as we were and watch out for the signs of T being ‘ready’.

If you’re not already aware, the advice according to Dr Google, in brief, says the signs that your child may be ready for potty training are:

T probably ticks most of these, but when we were faced with protest at the suggestion of sitting on the potty we stopped. One day, however, a few months before T’s second birthday, T started to tell us when he’d had a “wee wee”. So with this, we bought a potty and started introducing it around the house, inviting T to sit on it (fully clothed or not, whatever). He wasn’t keen for a while and often used it as a bucket for his toys or a hat, but we were in no rush so went with it.

Somewhere along the line we then bought a training seat for our toilet as something, I can’t quite remember, made us feel that T wasn’t perhaps comfortable on the potty – it did have quite narrow edges. But again, he’d sit on it for a while but then want to get down immediately.

A few months down the line we started to notice that whenever T was waiting for bath time, often nude standing against the bath, he would suddenly pee up the bath – so we decided to take this opportunity of guaranteed wee and place him on the training seat before bath time whilst the bath filled up. It worked well every now and again, but depending on how much T drank that day determined whether we would get our golden stream.

This then died down for a bit and although we still plopped him on the toilet, nothing would happen and T would start to ask to get down a lot sooner. Preempting a step backwards we stopped doing this and carried on as we were.

A few weeks later though, T one day said “wee wee” so we asked if he wanted to use the toilet and he said he did. So we took him upstairs, took his nappy off and plopped him on the training seat. Expecting him to then protest or ask to be put down immediately we didn’t expect what happened next – actual wee. Going into the toilet.

I couldn’t believe it. Our just turned two year old was going to the toilet! On an actual toilet!

After the screaming stopped and T was thoroughly congratulated we realised that potty training was imminent again, especially as he was starting to recognise what was in his nappy a lot more often, and therefore we decided to up our game a notch. After all, it was one wee and it was a fluke that we managed to catch it, but we didn’t want to miss another opportunity. So the next morning when T got up we decided to take him to the toilet straight away as apposed to changing his nappy, and without any concentration or thought he went to the toilet again! Again, we screamed and congratulated him as if he’d won an olympic gold medal.

And that’s where it began…

T now currently wakes and goes straight to the toilet, and if we’re lucky it happens straight away. If not, we’re there for a bit longer waiting for him to stop talking so he can concentrate, but it happens nonetheless. Because he’s happy with his training seat we’ve now gone back to sitting on the seat whilst his bath fills and lo and behold he now goes to the toilet before bath time. We continued this routine on holiday and despite a change of scenery and lack of home comforts he continued as if nothing was different!

Although we are definitely on the potty training rollercoaster, there’s no way I’m going to push this harder than it needs to be by constantly asking if T needs to use the toilet. I know him and I know he’s not ready for that – it would just make it stressful for everyone. We may start taking his seat out with us and if we know he’s drunk quite a bit of water we’ll offer the use of the toilet every now again, but again, not push it. I don’t want our whole life to evolve around bowel movements (not yet anyway). So far, though, it’s working well – and he seems pretty pleased with himself (especially when he’s rewarded with toilet paper to play with – strange child) which is all that we want right now.

How old did your little one start training? Any tips? 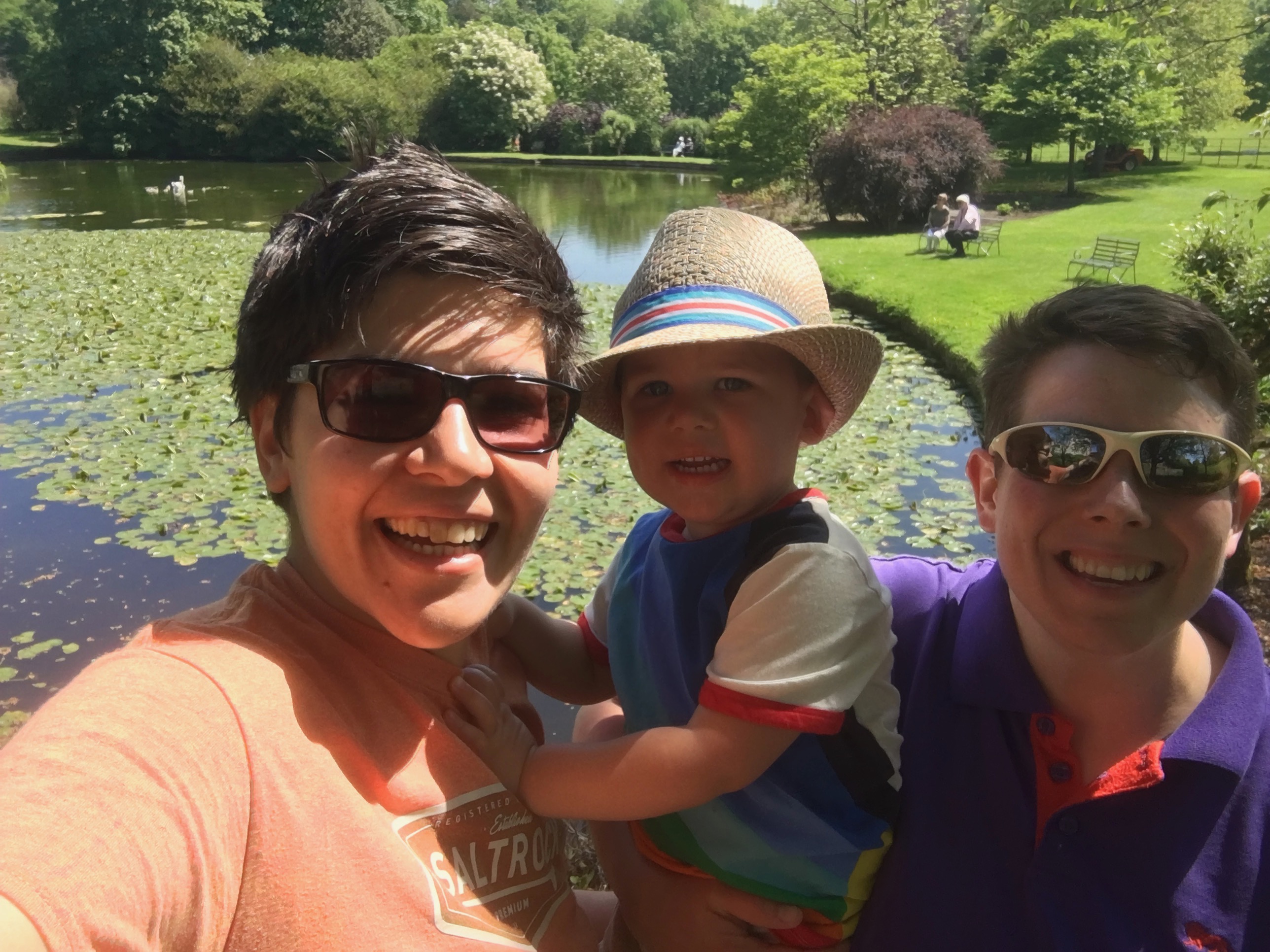 I’m not sure if you read my recent post about it, but M potty trained around her second birthday, at her own request. It was surprisingly straightforward which I think is because we’ve always done a lot of nappy free time and, for months now, she’s been able to tell us when she needed her nappy put back on – so, that’s my tip: nappy free time to get him used to requesting SOMETHING be done when he needs to go.

Totally with you on not constantly asking if he needs to go, too – every time we asked, we were met with resistance (followed by an accident); letting her figure it out for herself was the easier, more peaceful approach.

Ahh bless him, it sounds like he’s doing brilliantly. Both of mine potty trained when they had just turned two, my eldest woke up one day and decided she didn’t wear nappies anymore and my youngest started to use the potty a bit so we decided it was the right time. They were both ready so it didn’t take long.
Nat.x