Days Out - Our Puddleducks Photoshoot -

T has been going swimming with Puddle Ducks for a few months and is now quite the swimmer. It’s not yet actual swimming like you and I would do, it’s swimming baby-style, meaning that he knows how to behave in the water. He knows how to spit water and kick following a prompt, as well as lay on his back with minimal assistance. He can also reach out whilst kicking meaning he’s getting the swimming basics. On top of this, he is also confident when “swimming” underwater which is amazing, albeit daunting, to watch when he’s kicking to reach the surface of the water And succeeding! I don’t know how the Puddle Ducks program works, but whatever they do it works as T is now very confident (and happy) in water.

So when we got an email a few weeks ago advising us that there would be an opportunity to have an underwater Photoshoot we couldn’t resist. T is amazing with submersions so we wanted to capture that once in a lifetime moment on camera. Unlike other water classes for babies, the Photoshoot wasn’t included in the cost of our lessons. I personally like this idea as I know from going to the classes that not every baby likes going under water, so having a Photoshoot included in the price of your lessons is then, sadly, wasted.

We had to drive to Tunbridge Wells for the shoot as the next opportunity in Brighton wouldn’t be until T would be a year and we wouldn’t be sure whether he’d be agreeable to submersions so we went with this option.

The site where the Photoshoot was based for the day was stunning, which made it even more enjoyable.

Puddle Ducks have always been very lucky with their locations, and little did I know that they have DOZENS of sites across the South not to mention the north and Midlands. Their instructors are also extremely dedicated and often travel to various locations for their lessons during one week.

As we entered the warm log cabin where the pool was, T began to get very excited. Although there was no chlorine smell, he knew what was going on. I immediately saw all the equipment set up for the shoot and also began to get excited.

After getting changed and coming back poolside it was simply a case of waiting for our allotted slot. 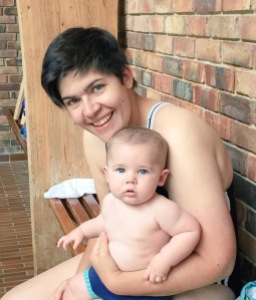 Once in the pool, we were given a detailed run down of how the photoshoots work and what will happen. Puddle Ducks had arrange for a professional submersion expert to come down for the day to assist with the shoots. For me, this was reassuring as I was concerned I would mess up and either a) not grab T in time or worse b) mess the photos up! Up until now, T has been submerged plenty of times so I wasn’t at all nervous with someone else doing it  – however it can still be daunting for parents to watch someone else submerge their child.

Whilst the shoots were happening we went through a mini class at the same time to keep the babies calm and focussed, this was nice as I was able to experience another instructor from our usual one.

In total, we had three separate shoots of T and one shoot with me and T underwater if I wanted to (of course I did!). Then, it was just a case of waiting for the photos to be put online that evening within a secure page that required a password.

What I liked about the day was that there was never any selling or pressure to buy. I’ve known plenty of studios in the past to invite people along to a “casual” or free Photoshoot only to be pressured into buying something later. With his photoshoot, you’re invited to view that days photos and pick what you’d like.

When it comes to buying, you have several choices and packages ranging from printed photos to USB sticks and canvasses.

We chose to get 5 of our photos put onto a USB stick for future printing. This then came with a free printed photo.

It really was a lovely day. T even seemed to enjoy himself as well!

We received no compensation for the purpose of this post/review.