In addition to what’s in my cupboard, I decided to give making my own snacks a go last week. I’m no Mary Berry, but it’s likely to be a hell of a lot cheaper, and probably healthier too!
Here’s my (not so much of a) recipe for banana oat bites:-

3 bananas
75g porridge oats (25g per banana if you wish to make smaller batches). You can add more oats if you don’t want the bites to be so spongy.
2tsp cinnamon.
1tsp honey (any other moist, sweet stuff will do. I’ve seen apple sauce used as well as coconut oil).

Break up and mash the banana.

Add the porridge oats, cinnamon, and honey. You could probably add other bits such as nuts, raisins, or chocolate chips at this stage.

Mix to an even colour. 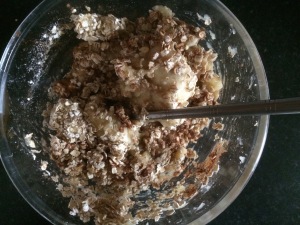 Spoon out into even dollops. 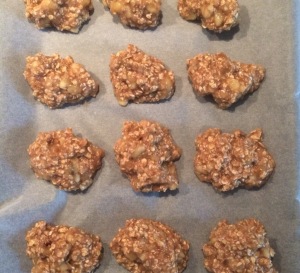 When they come out of the oven, they will continue to cook, so even if you bring them out at 30 minutes, you’ll still notice a little spring in them still just not as wobbly as cooking for 20. 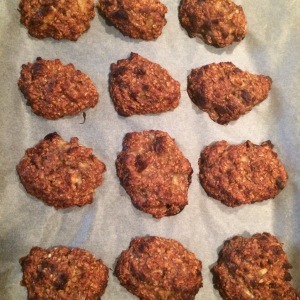 And that’s it! They’re my banana oat bites. I really like them as they use up any brown bananas (I HATE brown bananas) and they’re a nice treat any time of the day. I’m hoping to make some more but make them into bars as apposed to bites by spreading out the mixture as a slab.