How terrified were you in the run up to your first scan?

Me…well what with all the heartbreaks K and I had endured with BFNs over the last 18 months, I was feeling pretty sick with fear that there wasn’t a baby there and that this was K’s body play a sick and cruel joke on us.

In the few days running up to it, I was unfortunately poorly, and being the good wife that I am, I opted to sleep on the sofa to prevent K from getting sick – so that combined with the stress of the upcoming scan caused many sleepless nights.

The morning of the scan finally arrived, and with all the nerves (they were worse than the day we got married) I decided breakfast was a no go, whilst K managed to stomach it, and was not showing any nerves. She just seemed to be full of pure excitement.

We were very lucky as our appointment was booked for 08:55 in the morning, so we had to get a move on early and start to make our way to the hospital.  Anticipating and envisaging huge tailbacks from Brighton to where we live we decided to get on the road early so not to miss our appointment.
In the car on the way there, we were happily talking about the excitement of seeing Beansprout, but in my head I was still preparing for the worst.  I was also preparing myself to cry when the more than likely relief of seeing a wriggling little body on the screen was to happen.

On arrival in Brighton (which was a good 30 minutes early for the appointment, as there was absolutely no traffic to be seen – typical), we took a slow bimble to the hospital from the nearby street where we parked (if you’ve every tried to park near the hospital, you will know it is an absolute nightmare, unless you are a local resident with a permit – which sadly I miss in cases like this – we literally lived 5/10 minutes walk from there only a few years ago).

Now I’d done my research on where we needed to go and knew it was just inside the main entrance on the right hand side, but being with (dare I say it) a hormonal pregnant woman with an apparent 6th sense about the direction, I let her lead as she wasn’t going to listen to a word I had to say, anyway.

After getting lost and possibly insulting a woman who was waddling towards us, assuming she was pregnant, K gave up and asked for some help from a very sweet male nurse who walked us back to the entrance of the hospital (and yes… I did say, I told you so!).

We booked in and took a seat with the other couples, and waited for it to finally be our turn to be called in.  This could not have been more than 15 minutes that we were waiting, but it felt like an eternity and I could already feel myself getting worked up. I managed to stay strong and held the tears at bay… at this point at least.

Our turn was upon us and we were being summoned by the Sonographer into a very cosy, clean, and comfortable looking room.  Instantly we were welcomed as the couple that we are, not that I expected any different; but you know how it can be and sometimes people mistake you for “the friend”. We were made to feel at ease and very comfortable.

K was asked to hop (not literally) onto the bed and prepare for the scan, and within a matter of seconds K had rolled down her trousers and they had the equipment on and it was almost instantaneous.

There he/she was – our little Beansprout.  It was the most amazing feeling ever but also the most emotional I’ve ever felt during my 32 years in this world.

I was just about to release the tears when I turned to look at K and found her crying and laughing at the same time, and I just knew I needed to be the comforting one for her, so stopped myself.

Then the next bit came – the heartbeat. Although it was only for a brief moment, unfortunately, it was still our baby’s amazing little heart saying hello to us.  If only I could have that as a message tone for my phone, as I just want to hear it all day long – its such an amazing sound.

In no time, the scan was over and it felt like it took a lifetime for the Sonographer to get the measurements as Beansprout was clearly camera shy and was not wanting to cooperate, but eventually they got what they wanted, and recorded a huge amount of pictures of our little sweetie.

Now, we went in there knowing full well when we conceived so we could pretty much say with certainty what our due date should be, but by their calculations, from Beanspouts size, we found out that rather than being 12w1d, we were being told that we were 12w5d – so due to this our due date has been brought forward to 26th March 2015.

We’ve either got our dates really messed up (which I highly doubt), or that we have a slightly larger baby being baked.  Personally I’m not worried as luckily I’m not the one with the job of pushing this little bruiser out. To be fair, K isn’t that bothered either as she’s just over the moon that we’ve managed to conceive, lets see if she’s still so happy when it comes to giving birth.

Thank you for taking the time to read my ramblings, and on a final note, please say hello to; 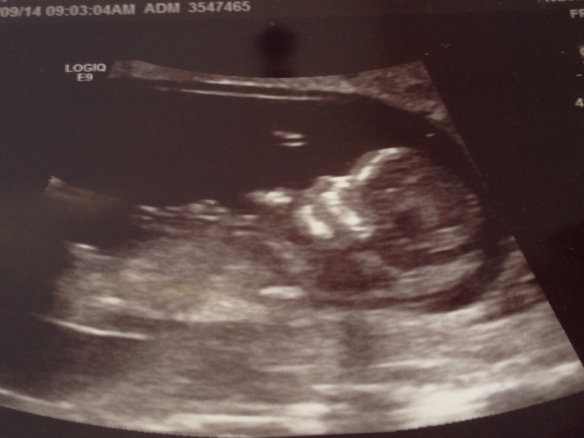